🚨JOIN US for International Women’s Day Moral Monday as we highlight the work of poor & low-income women on the frontlines of the fight for COVID relief that includes a $15/hour minimum wage for all workers. Take action & call your Senators: bit.ly/ppccallcongress

Rochester Poor People's Campaign on the main line..love. power and joy to all of our sisters in the struggle

We can seek all day but it must be moved.

Everybody has the right to live. The least our national and state legislators should approve for workers in America: $15/hour plus tips and benefits.

It is morally reprehensible that we have to fight for wages and benefits that honor the work and needs of people in this nation!

We must hold all elected officials accountable for wages that are not livable, not enough!

Policies that limit our lives and the livelihood of our local, national and global communities!

Banging pots and pans for low wage workers is not as honorable as increasing wages that are livable and comfortable to live and thrive!

Hard to celebrate with family and community are suffering!

We can say what's good, what's bad, what's nice and we don't need permission to say what we feel.

Go, Julia! You are a strong advocate for women's rights!

Just called my Senator's office and wow- they were somewhat demeaning about the minimum wage and needs of businesses as more crucial.

Nell Myhand, your voice and presence is powerful! Thanks for helping bring giants down and building community up!👊🏾🖤🔥

No one should have to work in those conditions

God bless all of you for all of the tremendous work you do!

Someone wrote “so u get tips” what is meant by that? Tips aren’t enough, may help but tips get taxed. $15 is not enough because $15 gets taxed. No one lives on the gross.

We will not take no for an answer $15/h minimum wage. We are not done

We stand with you Alabama Poor People's Campaign: A National Call for Moral Revival!

I am not buying anything from Amazon Prime this week in solidarity of those wanting a union.

It’s amazing how those with the least to give, give the most❣️. Bless you ladies 💕

If you want something done right, ask a woman of color to do it❣️

Maureen Taylor talks about poverty affecting little children of ALL colors, and that is right! Preach it my Sister! 🙏

“Today, we must continue to push for passage of a new, landmark Voting Rights Act, so that our nation will not have to keep fighting the same battles that my great-aunt, others, and now myself continue to challenge.” -Elliott Smith, national social justice organizer for Repairers of the Breach & the #PoorPeoplesCampaign ...

On the anniversary of Selma we are sadly reminded: voting rights are still imperiled | Elliott Smith

Fifty-six years ago, my great-aunt, Amelia Boynton, was beaten senseless while marching. Let’s honor her by protecting voting today
View on Facebook
·Share

EVERYONE SHOULD WORK TO THE BEST OF THEIR ABILITY!!!

One thing to keep in mind when you see today's PPC promote voting: There isn't a single candidate/politician today who stands up to restore basic human rights for those left jobless (and many who can't work). The poor.

Georgia just outlawed handing out pizza to folks waiting in line to vote. Why is that, and why are those waiting many HOURS in line to vote mostly POC? We still have a long way to go!! C'mon arc of history--get busy bending!!! :-(

We won't be silent anymore!

In a nation as wealthy as this one, not anyone should ever be hungry.

Continental prayers and support through these troubleson times for our people and we want be silent anyone!

Everything is quiet and can not hear you all.

Never give up! Peace and power to ya"ll to! Love!💓

Thank God for using you to be a vessel to speak out for his people! Thank you! Brother

I truly appreciate the opportunity to join in with you all on this beautiful fellowship service and thank rev. carolyn foster!

Keep praying to our Lord Yahweh(God) Almighty in heaven until change comes!🙏🙏🙏

Lord protect my sister. Please bring favor for her in Jesus's name.

Over 30 million people loosing a billion dollars a work day

Lord Jesus Christ have your way when you return to Earth!🙏🙏🙏

Please Mute if you are not speaking. Hearing background noise.

Thank you brother Elliot for sharing the story about your aunt!

Recommend you read the book CASTE “The Origins of Our Discontents”

ThankU for getting involed

Thank you Elliott for highlighting her works. Please give the Title of the Book u read from Elliott.

Can u at the beginning so we won’t miss previous speakers.

The White House wouldn’t support the Vice President overruling the advice of the parliamentarian. Senator Schumer took the $15 minimum wage out of COVID relief bill before it was brought to the floor. 8 white Democratic senators led by Senator Manchin joined extremist Republicans to block Senator Sanders' amendment.

These votes are rooted in a form of systemic racism, classism, and elitism that even Democrats fall into when they're led by so-called centrism & neo-liberalism that passes policies full of disparate impact on Black, brown, indigenous & poor white essential workers.

When all 50 Republican senators & 8 (all white) Democrats voted to deny passage of $15/hr min wage — which would have lifted 45% of Black workers out of poor & low-wage jobs, & 62 million people overall — these actions are policy forms of racism & classism & disparate treatment.

I give thanks for the relief that will come through this bill. But we cannot pretend that the people who are suffering the most from inequality are being represented when the policies most essential to their survival are so easily negotiated away. -Rev. Dr. William J. Barber, II #PoorPeoplesCampaign ...

I have faith the minimum wage will be addressed in the coming months.

Maybe Washington can't hear you. They sure can't feel your pain. Maybe it's time they looked you in the eyes and explain why they don't want you to make a living wage.

Thank you for this theological reflection!

Let's make sure this doesn't die and is brought up again, and again if necessary. A critical piece of legislation.

I used this statement to send to my elected gov't officials! Let's end poverty in US of A.

All 8 Dems who betrayed the people of this country have got to be primaried.

Someone is bullshitting the math here. Jumping to 15 an hour is only going to raise the wages of the people that dont get fired. And some of them....are getting fired.

Right, people don't march in the streets saying" please don't raise my wages!" Forward together Not one step back!!! This is not a political issue this is a human dignity measure. Great Measures Moving Forward...

How much an hour do the politicians get who voted against it?

Change is going to come, because good people are fighting for change!

Just learned that Joe Manchin has business interests which includes La Quinta Inn in West Virginia whose workers are paid about $8.88/hr and he would take a hit if he have to increase their wages to $15/hr. So his resistance to increasing the minimum wage had little to do with helping American workers😬

Do you know how many poor white people's wages are under $15 too? Most everyone I know except a few.

Term limits is necessary and less benefits. If they want to serve the people, they must live among the people.

THANKS to everyone who tuned in to today's #MoralMonday: Women on the Front Line! The voices of poor & low-wealth women at the frontline MUST be heard! #FightFor15 etc!

‘Others, such as @RevDrBarber, are less patient. The open letter in @thenation that he co-wrote told @VP: “Your actions will determine whether you are remembered alongside Harriet Tubman, Rosa Parks, Sojourner Truth, Ella Baker...”’ @WaPoSean @CleveWootson Harris caught between a restless base and a traditionalist Biden

As Harris seeks to build a political identity, she faces dueling pressures from impatient Democratic activists and a more methodical Biden administrat...

"Before the pandemic, I was a tipped worker making $5 an hour. We all know that’s not enough to survive ... We need to eliminate the sub-minimum wage and pass $15 an hour for all workers!" 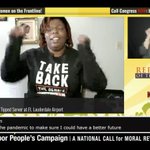 This #InternationalWomensDay the #PoorPeoplesCampaign remembers that 52% of women (5.4 million) & 60% of children (2.5 million) in #Florida are poor or low-income! 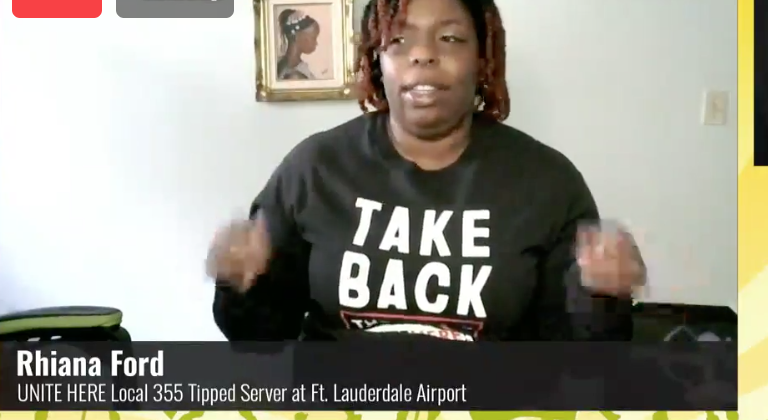 70% of the American people support raising the minimum wage to $15/hr. I think Democrats are really playing with fire here by delaying this vote. 65 million poor & low-income voters will remember in 2022, if they fail to fulfill their promise. #FightFor15 #PoorPeoplesCampaign 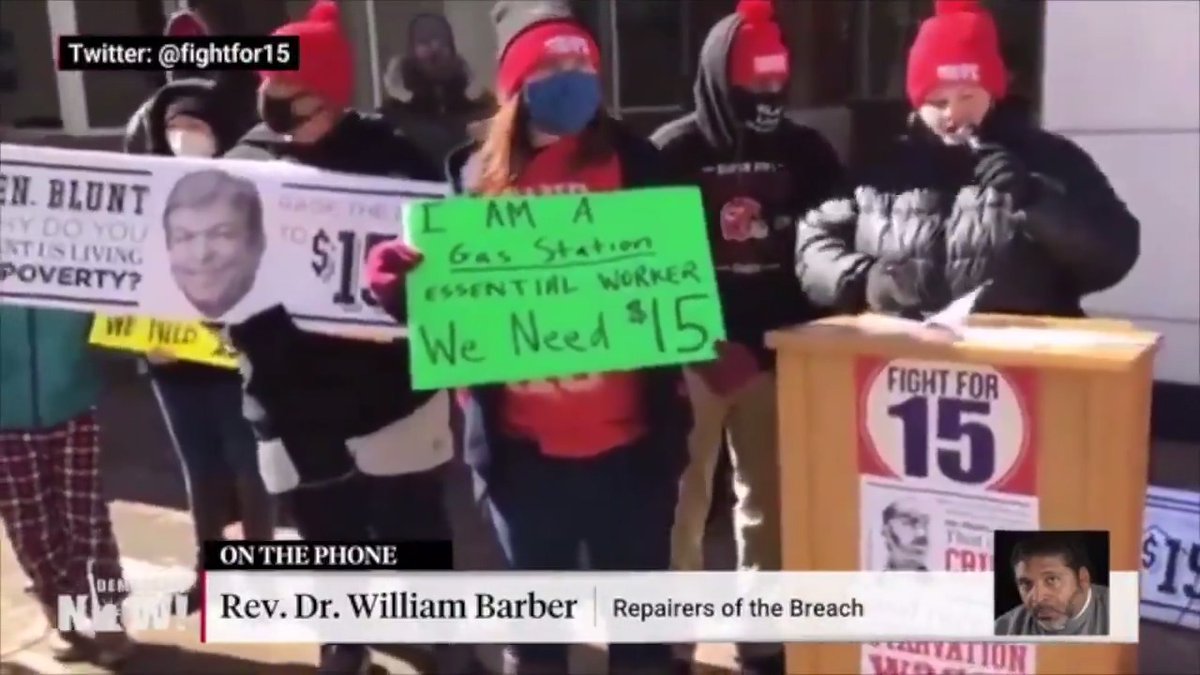 🚨featured fight🚨 learn more about one of our

This past #MoralMonday we uplifted the struggle of

From mining industries on sacred Apache land to th

Starting NOW: Join is at poorpeoplescampaign.org/l

On Monday February 8, 2021 join the @poorpeoplesca

Mark your calendars and join us for: A NATIONAL C

Join us at the top of every hour today through 8pm

Join us for a special Instagram Live Moral Monday

Join us on Monday! The registration link is in the

This weekend, faith leaders and people of faith ac

On Oct. 5, states take the fight to Senators' offi

How do you mourn the loss of a great champion for

Francine Jefferson from the #PoorPeoplesCampaign w