WHAT: Moral Monday Caravans and March on McConnell: The McConnell-led US Senate has refused to take up a full and comprehensive relief package during the greatest public health crisis in a century, yet is now rushing to push through a Supreme Court nominee to fill the seat of Justice Ruth Bader Ginsburg.  Following a powerful … Continued 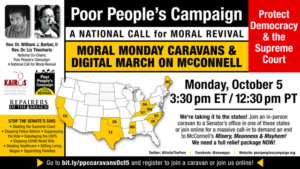 Moral Monday Caravans and Digital March on McConnell - Taking it to the States Inspired by the powerful Moral Monday Caravans organized by the Kentucky and Washington DC Poor People’s Campaign, states across the nation are taking the fight to their Senators' offices with caravans and a massive call-in campaign to all US Senators demanding they … Continued

An event every week that begins at 7:00 pm on Monday, repeating indefinitely

Join the Colorado Poor People's Campaign: A National Call for Moral Revival for our weekly statewide meeting! Click here to join via Zoom.

Sign up to do outreach to OHPPC members in your region. https://bit.ly/PhoneBankOHPPC