About the Maine Poor People’s Campaign: A National Call for Moral Revival

The Poor People’s Campaign: A National Call for Moral Revival is uniting people across Maine to challenge the evils of systemic racism, poverty, the war economy, ecological devastation and the nation’s distorted morality of religious nationalism.

Email maine@poorpeoplescampaign.org to get involved!

About 150 preachers, rabbis and imams are promising to invoke Black abolitionist Frederick Douglass on July 4th as they call for the U.S. to tackle racism and poverty.
View on Facebook
·Share

[LIVE] Indigenous Activists Assert Right to Unceded Land At Anti-Trump Protest. National Guard present in riot gear. Activists have delayed Trump's rally as they're preventing attendees from getting there

In the 1920s, South Dakota historian Doane Robinson hired sculptor Gutzon Borglum to construct a national monument to promote tourism in the state.

Gutzon was a member of the Ku Klux Klan, and had recently helped construct a memorial to Confederate leaders in the state of Georgia. Some of the funding for the Mount Rushmore project came from the KKK.

The mountain that was chosen for the site of the monument is known as "The Six Grandfathers" (Thuŋkášila Šákpe) by Lakota peoples, named after the Earth, the Sky, and the four directions.

The nine tribes of the Great Sioux Nation never agreed to or signed away their rights to this land; the Fort Laramie treaty in 1868, which the tribes did sign, guaranteed them "undisturbed use and occupation" of the land on which the Six Grandfathers, or Mount Rushmore, is on.

Today, coinciding with a Trump/Pence rally in Keystone, SD, Indigenous activists plan to assert their right to unceded treaty lands.

It's time we learned our true history, not fan fiction to empire.
#PoorPeoplesCampaign #WeWontBeSilentAnymore ...

The U.S. celebrates this Independence Day amid calls for systemic reform. In this film, five descendants of Frederick Douglass read excerpts of his speech, "What to the Slave is the Fourth of July?"
View on Facebook
·Share

PPC: A national revival to challenge the evils of systemic racism, poverty, the war economy, ecological devastation and the nation’s distorted morality.

“Barber pointed out that the #PoorPeoplesCampaign does not endorse candidates, but mobilizes voters—notably poor voters whom politicians of both parties have ignored, and who are discouraged as a result.” 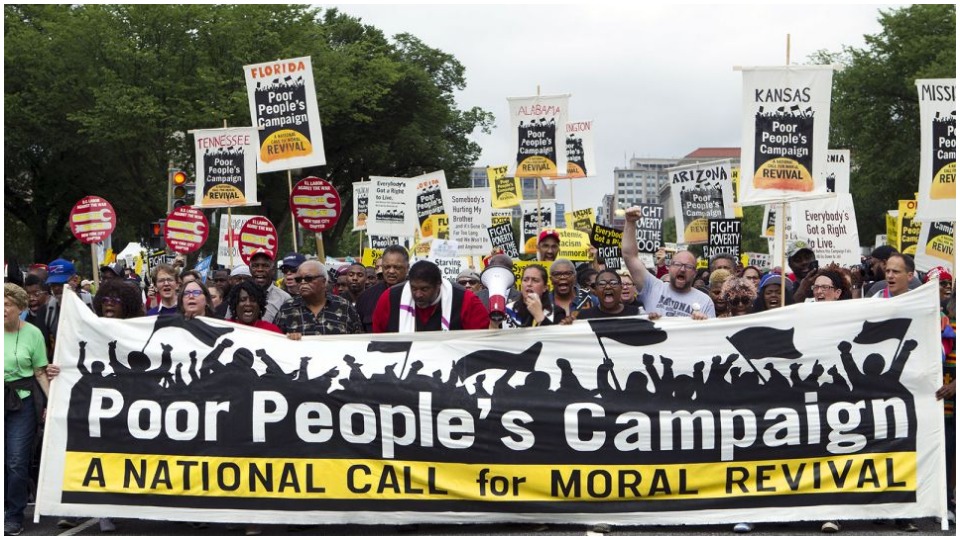 WASHINGTON—From eradication of poverty, an end to U.S. racism, to dismantling the war machine and creating a Green New Deal with thousands of well-p...

Legislative and Policy Priorities of the Poor People's Campaign: A National Call for Moral Revival – Executive Summary June 20, 2020 From ...

Join the #PoorPeoplesCampaign by texting MORAL to 90975.

This movement is about saving the soul of this nation!

“The Poor People’s Campaign does not endorse candidates, and we don’t need to. We have made our platform clear...and we will hold every elected official accountable.” @wilsonhartgrove https://twitter.com/UniteThePoor/status/1275790940150599681

This error message is only visible to WordPress admins


Error: There is no connected account for the user maineppcampaign. Feed will not update.